“You can’t cross the sea merely by standing and staring at the water.”  – Rabindranath Tagore 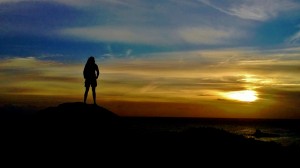 It is scary and exhilarating to launch into an endeavour with so many challenges and unknowns. But the opportunity to pursue the dream that I have had since I was a child is too great to pass up, and I owe it to the 15-year-old version of me who sat in a biology lesson and wrote in my diary: “I want to go to the Olympics one day” to take a chance, throw everything at it, and see where it leads.

I am preparing to head off on the second big adventure of the year, after a week in which I have pulled my first almost-all-nighter since my Cambridge dissertation was due in the following day, added some great people to the team, done two weeks’ worth of work in one, and done a spot of questioning my own sanity!

When I came home from Miami at the end of January after a really productive month-long trip, I was ready to burst with motivation and excitement about trying to put together a new campaign.

Like with any high, I fell back down to earth with a bump fairly rapidly when the reality hit home of looking at my bank balance (after Miami this was a dark and sad place!), trying to combine part time work, train as hard as I wanted to, and work out how the gubbins I could build the programme I felt would be ultimately successful.

Self-funding a campaign is tough, and sailing at a top level is not cheap. There are continual doubts:

Is there so much to do that I will end up letting people down left, right and centre?

Am I spreading myself so thinly trying to do this that I can’t train as productively as I need to?

Is this even possible?

Am I good enough?

I am so lucky that I have surrounded myself by people who seem convinced that the answer to the last two questions is “yes”.

I know that this is just the beginning of the road and I need to manage my expectations having been away from the circuit (pushing pens and paperwork and playing folk music… as you do) for so long, but that almost makes it all the more exciting.

The last month and a half has been spent working part time at the New Milton Advertiser & Lymington Times putting out the leisure page every week – regularly hitting the gym at 6am, running to work with dripping wet hair, doing the nine to five, then putting the second training session in on the way home before sending campaign emails and sorting logistics late into the evening – then sailing as much as possible on the non-working days.

It has been pretty full on with some big highs and some equally big difficult moments where it all seems insurmountable, but it has been an incredibly humbling time, and I have begun to lose count of the people who have gone out of their way to help.

We launched a three-week crowdfunder for a new boat to announce my return to the international sailing circuit and absolutely smashed the target of £6,000. The people who donated came from all walks of my life, and included some that I don’t even know, but I so appreciate every single contribution because it wasn’t just money – it was a boost that someone believed in what you were trying to do.

My support team has been growing, which I am really thrilled about. John Bertrand is managing my campaign, I am building a professional donor and sponsorship programme, working with Phoenix Marine, and have a small army of people behind the scenes who are getting on board.

So from John, for dealing with the dozens of emails a day, to Neil, for driving the RIB and boats out to Palma, to Charlie, for loading boats with me late into the night in the cold and dark, to Nigel and Richard, for turning out in the pitch black and pouring rain to deal with a boat work disaster, to everyone who contributed to the crowdfunder and sent me lovely messages, to so many others who have gone out of their way… THANK YOU. You are all brilliant.

Onwards to Palma, to launch and name the people’s boat.

Let’s go on an adventure!